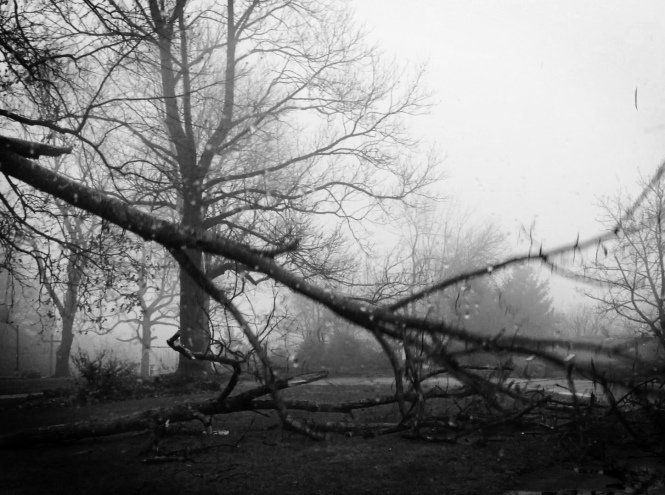 The first knot his father taught
him held a mattress to the top
of the car. This is a Trucker’s Hitch,
the old man said, looping the rope
in and out of itself as though fastening
large things to small places
was easy. Lord knew, Henry
had never had any luck keeping
beds and whatnot from sliding
off the rails. The next knot
was a Figure Eight.
Again, his father said, a thousand
times over. This one came undone so easily,
Henry didn’t see the point.
The Tautline Hitch at least made sense—
his tent’s tension kept it strong,
even in the rain. Even when he heard
his father had cancer. A year after
that, they used Two Half Hitches
the night the tree came down
next to the house. They dragged
that log a thousand yards, it seemed,
though Henry let his father
do the tying of knots. In the rain,
the wet rope looked like a snake and bit
just as quick. Thunder and darkness
make everything feel impossible,
but even so, Henry didn’t know
that damned tree would be the last
wild thing his father ever knotted tame.
When the old man died, Henry tried
a Bowline Hitch to secure the tarp
over the mounded ground near
the gravestone, but rescue
had never been his strength.
Some things can’t be saved,
his father once said,
and so Henry never did learn
how to knot it right.

Editor’s Note: As an editor, I feel it’s important to avoid indiscriminate self-publishing, but on one day a year, perhaps you will forgive me (yes, it’s my birthday). This poem is from a collection I’m working on in which I explore third person narrative. Inspired by: How To Tie The Only Five Knots You’ll Ever Need

5 thoughts on “Henry by Christine Klocek-Lim”

This site uses Akismet to reduce spam. Learn how your comment data is processed.